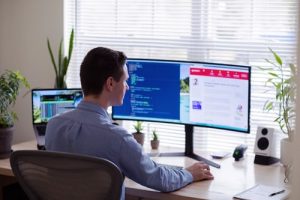 Almost all large employers do not plan to bring staff back to the office full time, while Google and KMPG have laid out what their return-to-office plans will look like.

A poll of 50 employers by the BBC found that 43 expected a mix of home and office working post-lockdown, while four said they were keeping the idea of hybrid working under review.

Mark Read, chief executive of advertising firm WPP, told the BBC that it would never go back to its pre-pandemic ways of working, but would need to plan how its office space could be used.

Aviva said it would be mindful that many staff appreciate being able to work in an office, but would allow staff to spend some of their time working flexibly and remotely.

Recruitment firm Adecco said it would encourage leaders to engage with colleagues to find ways of working that are suitable for the business.

“The move to hybrid working has caused a major concern for employers who are now challenged with creating a balance and strategic alignment between remote and physical working. Also, Zoom fatigue is a growing issue, and large-scale virtual meetings have all too often become one-way conversations,” he said.

“Companies moving to a hybrid model need a new approach to turn virtual and offline meetings into more valuable engagement touchpoints. Gamification, Q&As and feedback loops are all important tools that will help employers open up two-way conversations. This means they can take a temperature check on employees and, crucially, help detect early signs of burnout in this soon to turn into the new norm of working.”

Meanwhile, Google’s chief executive Sundar Pichai has revealed that it has seen nearly 60% of staff return to the office in locations where its premises have already reopened.

“For more than 20 years, our employees have been coming to the office to solve interesting problems – in a cafe, around a whiteboard, or during a pick-up game of beach volleyball or cricket,” he said in an email to staff.

He envisaged that teams would come together in the office “approximately three days” a week, and work “wherever suits them best” for two days.

KPMG has also encouraged staff to work more flexibly. It has told its 16,000 employees that they can work in offices four days each fortnight and leave early one day a week.

Staff will also get an extra two-and-a-half-hours off per week over the summer “to promote wellbeing”.

Jon Holt, chief executive at KPMG UK, said: “We trust our people. Our new way of working will empower them and enable them to design their own working week. The pandemic has proven it’s not about where you work, but how you work.

“We have listened to our people and designed this strategy around our staff and how they can best support our clients.”

Earlier this week, JP Morgan and Goldman Sachs said they were preparing to bring staff back to the office this summer. Both organisations have claimed that remote working does not suit their culture and that their working practices will look similar to how they operated pre-pandemic.