Care workers who ‘sleep-in’ not entitled to national minimum wage 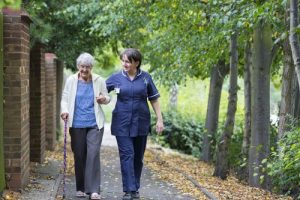 Supreme Court ruling on National Minimum Wage entitlement during sleep in shifts determines payment due only while workers are awake and working.

Care workers who sleep at service users’ homes are not entitled to the national minimum wage for the hours they are not carrying out work activities, the Supreme Court has ruled – a landmark decision that is set to have ramifications for jobs where workers are required to sleep at their place of work.

The Supreme Court has handed down its judgment in two cases it looked at side-by-side: Royal Mencap Society v Tomlinson-Blake and Shannon v Rampersad.

It found that a worker is only entitled to the national minimum wage for the hours they are awake and working and the time a worker is required to sleep on site or nearby doesn’t count towards minimum wage calculations.

This is the final ruling in this area, and the claimants in the two cases have no further route of appeal.

In 2018 the Court of Appeal found that care worker Ms Tomlinson-Blake, who was employed by Mencap, was only “available for work” when she was sleeping in a service users’ home as part of the 24-hour support provided to them, and was therefore not entitled to the NMW.

She was paid a flat rate of £29.05 for a sleep-in shift. She had her own room and could sleep during the shift, but was required to keep “a listening ear” during the night and provide support where needed.

The lower courts had found that Tomlinson-Blake had been working throughout her sleep-in shift and should have been entitled to the NMW for the entire shift. However, the Court of Appeal ruled that she was only entitled to the NMW for the time she was actually carrying out her duties – such as helping a patient or doing other work – and not when she was sleeping or resting.

The Supreme Court agreed with the Court of Appeal’s ruling and dismissed Tomlinson-Blake’s case.

In Shannon v Rampersad, Mr Shannon was a care worker who lived in a studio in an elderly person’s home. He occasionally needed to respond during the night when the night care worker needed assistance. He was paid a salary and received an allowance of £50 per week to live in the person’s home. He claimed he should have been paid the NMW for the time he spent working at night.

The Supreme Court said there is a working from home exception in the NMW regulations, which applied in Shannon’s case.

Its decision in both cases centred around recommendations the Low Pay Commission had made to the government when formulating the NMW regulations. The LPC said that sleep-in workers should not receive pay for every hour spent sleeping, but should receive an allowance for a night shift unless they are awake for the purposes of carrying out work activities.

Richard Freedman, an employment lawyer at Stephenson Harwood, said many care providers would be relieved by the decision.

“They are guaranteed to escape the financial toll of significant extra costs and back-pay liabilities, which it was predicted would have forced many employers in the sector into insolvency,” he said.

“No longer will care business face claims that they underpaid staff, and there will be respite from similar ‘copycat’ claims, currently in the legal system, which are now likely to fall away.

“But while there will be celebrations today, many businesses in the sector face the future reality of turbulent employee relations with disgruntled staff; staff who had been pinning their hopes on the possibility of additional pay going forward, as well as significant back pay.”

Speaking after the judgment was handed down, claimant Clare Tomlinson-Blake said: “This case was never about the money. ​It was about the principle of treating staff fairly.

​”Sleep-in shifts aren’t about just being on call – it’s work. Staff are constantly on guard to protect the most vulnerable in society. The sound of a cough in the night could mean someone’s in danger.

“It was nice to be clapped by the nation, but that was only temporary. The care workforce should be valued permanently. Respect for staff shows that the people we care for matter too.”

Christina McAnea, general secretary of the Unison union, said: “No one is a winner from today’s judgment. Everyone loses until the government intervenes to mend a broken system that relies on paying skilled staff a pittance.”

Care providers that had been paying a fixed rate for sleep-in shifts will be relieved that their approach has been confirmed as legally sound, said Matt McDonald of law firm Shakespeare Martineau.

“If the Supreme Court’s decision had gone the other way, the bills facing care providers for historic underpayments would have been substantial and, in some cases, devastating,” he said.

Siobhan Fitzgerald, partner law firm at TLT, said care providers should still ensure they review pay for sleep-in shifts to remain competitive. “From an administrative point of view, employers will need to ensure that systems are accurately recording time spent working during sleep-in shifts, so that workers’ pay does not fall below NMW levels. Failure to accurately record and pay NMW can not only lead to claims for back-pay, but also liability for fines of up to £20,000 per worker,” she said.

“While the legal certainty surrounding sleep-in payments will be welcomed by those operating in the care sector it still leaves some difficult issues to consider: Will commissioners currently paying for sleep-ins continue to do so? Should care providers who have paying for sleep ins at the NMW now stop? This may give rise to employee relations problems and employment tribunal claims,” she said.

Matthew Wort, a partner at Anthony Collins Solicitors, believed that a regulated minimum rate for time spent sleeping should be set.

“The rate could be decided by the Low Pay Commission to make it fair for care providers and employees. A more effective alternative would be establishing a national pay framework for the social care sector – providing clarity on what a care worker should be paid in all settings,” he said. “The disparity in pay between social care and healthcare also needs to end, with social care no longer being the poor relation.”

Delivering the judgment this morning, Lady Arden said that legacy decisions in this area should be overruled – in particular British Nursing v Inland Revenue, from 2002, should no longer be regarded as authoritative. This is because the Court of Appeal could not properly have concluded that the employees were working for the whole of their shifts, and that it is unnecessary to consider the treatment of particular activities within that period.