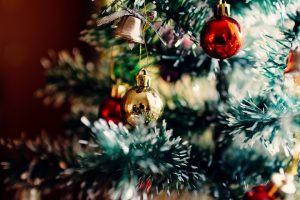 Question 1 – Which Christmas hit for Harry Belafonte in 1956 is now widely performed as a Christmas Carol? Mary’s Boy Child

Question 2 – The most viewed Christmas advert, based on Youtube views, was ‘Mog’s Christmas Calamity’ from 2015, which company was it advertising? Sainsbury’s

Question 3 – Which takeaway food is so popular in Japan at Christmas that it often has to be ordered weeks in advance? a) Pizza b) Big Mac c) KFC? c) KFC

Question 4 – Which was the first song to be broadcast from space when the Gemini 6 crew played a practical joke on Mission Control, suggesting they had spotted a low flying object? Jingle Bells

Question 5 – Who is generally recognised as writing the poem “A Visit from St. Nicholas” (also known as “‘Twas the Night Before Christmas”)? Clement C. Moore

Question 6 – What is a Buche de Noel better known as in the UK? Yule log

Question 8 – Which Christmas carol describing Mary’s journey to Bethlehem has been recorded by Gracie Fields, The Beverley Sisters, Vera Lynn and Aled Jones, amongst others? Little Donkey

Question 9 – In 2015 Age Uk said that almost 1 million older people experienced loneliness over the festive period in the UK. Which advert from John Lewis depicting a young girl and a telescope highlighted this concern? – The Man on the Moon

Question 10 – Snowflakes are often portrayed as being 6 sided but, studies suggest that less than what percentage of snowflakes exhibit the ideal six-fold symmetric shape? a) 0.1% b) 1% c) 10% – 0.1%

Question 11 – What was Mr. Bean searching for when he got his head stuck in the turkey? – His watch

Question 12 – Who plays Scott Calvin, the man who causes Santa Claus to fall from his roof, in the 1994 Christmas movie The Santa Clause? – Tim Allen

Question 13 – Shakin’ Stevens had a a Christmas No.1 in 1985 with “Merry Christmas Everyone”, but what was his birth name? Michael Barratt

Question 14 – The birth of Jesus is recounted in which two books of the New Testament, Luke and which other? Matthew