New jobs in the UK continues to grow 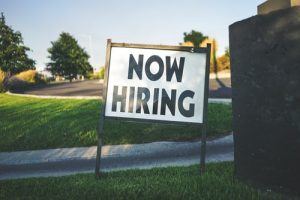 Job vacancies increased 17% in the week ending 20th September, with the number of roles advertised up 34% when compared to the last week of August as the UK adapts to the ‘new normal’.*

Vacancies in the capital dominate, while northern cities report sharp increase
According to the data, London continues told hold the lion’s share of the UK’s vacancies, with 15% of all jobs advertised hosted in the capital – a 20% increase week-on-week. This upward trend in vacancies was also reported in numerous cities across the UK, with Manchester and Birmingham seeing an uptick in jobs of 32% and 22% respectively week-on-week. This is indicative of a continued attempt by businesses to ‘return to normal’ as more employers adapt to an extended period of remote working.

IT vacancies bolster hiring
Broadbean’s statistics also revealed that across the sectors, IT vacancies remain high, accounting for 9% of all jobs advertised for the week ending 20th September. This represents a 39% increase week-on-week in the lead up to the Prime Minister’s announcement that employees should return to remote working where they can. With predictions that this home working rule will remain in place for a possible six-month period, this demand for tech experts will likely continue on this upward trajectory in the immediate future as businesses seek the tech expertise to manage and update IT infrastructures.

Alex Fourlis, Managing Director at Broadbean Technology commented: “While there’s a level of uncertainty still, September’s figures suggest that the UK is adapting to this ‘new normal’, with job numbers remaining at promising levels. Although in the lead up to Boris Johnson’s announcement of further remote working requirements, the idea was simply a prediction rather than a certainty, the increase in IT vacancies at this time suggests employers across the UK were keen to get ahead of the game this time around and prepare as far in advance as possible.”

“We are still facing tough economic times and we are by no means out of the woods yet. However, these promising signs indicate that for some employers at least, resilience remains intact. And with the Chancellor announcing further measures to not only secure jobs, but also extend loan schemes for businesses, we hope that this positive trend in recruitment continues in the immediate future.”