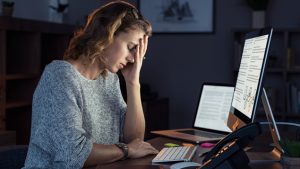 Three out of 10 adults in the ‘sandwich generation’ are concerned about the impact pandemic-related financial strain is having on their mental health.

More than half (55%) of 45- to 54-year-olds surveyed by insurer Aviva said they were more worried about their financial situation now than they were before the lockdown, while 16% said their adult children have become more financially dependent on them as a result of coronavirus-related difficulties.

Thirty-eight per cent said their financial situation meant they were having trouble sleeping; 19% said it was causing physical health problems, such as over-eating and preventing them from exercising; and 9% said they had increased their use of alcohol or drugs.

“The economic impact of coronavirus has been laid bare and our research has revealed the significant mental health impact that the financial concerns have caused,” said Alistair McQueen, head of savings and retirement at Aviva.

“While no one is immune to the knock-on effects that the economic downturn will have – the impact on the mental health on the squeezed middle is far-reaching. Too often this generation finds themselves shouldering their own financial burden, and at least part of their children’s, and it’s vital that more support is offered to them.”

McQueen said it was important that firms encouraged employees to have open and frank conversations about their finances with family and friends. Sixty per cent of mid-life adults who discussed their finances with a family member or close friend agreed they felt better for having discussed it, while 52% said they felt closer to their family and friends as a result of opening up.

“Too often these conversations are avoided or put off all together. Speaking about your financial concerns can lighten your load, reduce the stigma, and encourage the sharing of advice and guidance,” added McQueen.