How Covid-19 is transforming our offices 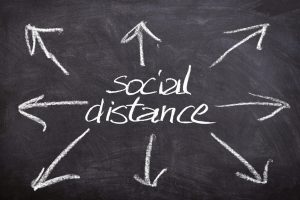 Moneypenny, surveyed 1,000 office workers to gauge how the nation is feeling about getting back to work. With many returning after months in isolation, anxieties are expected to be high.

Almost a half (45%) of the office workers surveyed said that they have been told by their employer that they’re to return to work immediately, with a further 31% saying they’ve been given the go-ahead to return within the next 1-4 months.

However, around 5% said their employers have stated they won’t return to work until January 2021 at the earliest, with almost 18% have not been given a date to return as of yet.

The majority of those that stated they are already back in the office were situated in the North East and the East Midlands, with East England and Scotland having the highest percentages of those with no return date as of yet.

Are UK office workers comfortable with returning to work?

The findings showed that over a third (34%) of workers are entirely comfortable returning to the office. However, 48% admitted to having some concerns about Covid-related risks.

When looking at the regional data, around a quarter of those in Yorkshire said that they were not comfortable with returning to the office and with a further look into why this might be, we can see that only 15% said that their workplace have made masks compulsory in all areas of their offices, the lowest percentage of any region in the UK.

However, those in Northern Ireland were the most comfortable, with around 47% saying they had no issue with getting back to the office.

Is your office recovery ready? 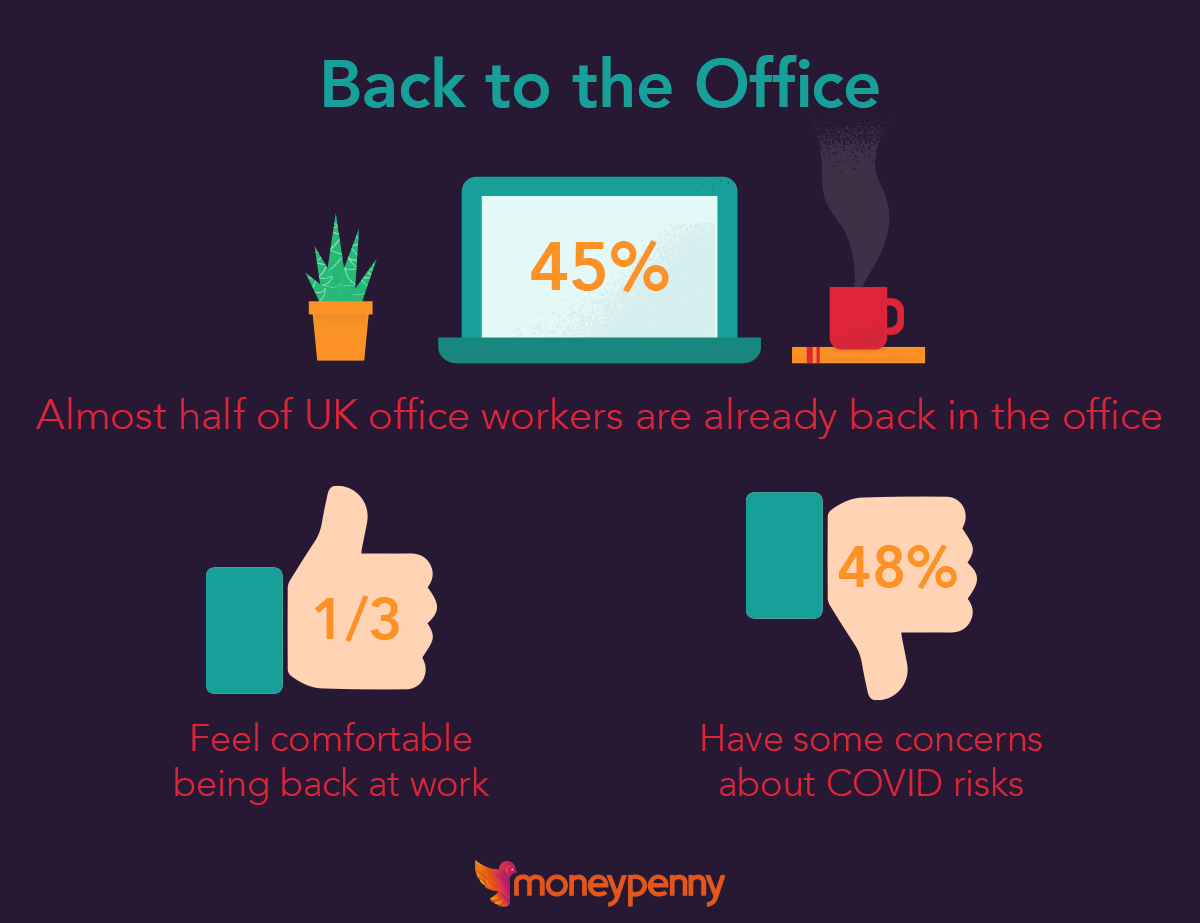 With a return to the office, commuting also has to be taken into consideration, with public transport being of higher risk than other forms of transport.

The data shows that the majority (66%) of office workers will be choosing to take their own cars to work to avoid contamination. The East Midlands had the highest percentage of people choosing to drive to work, with 81% saying they will commute via car.

Shared transport, such as car shares and public transport had the lowest percentages. Interestingly, Manchester had the lowest percentage of workers stating they would be using public transport, with only 7% claiming it to be their commuting method of choice, compared to the 16% national average. The majority of office workers in Manchester said that they will take the car or walk into the office.

Wearing masks in the office

When we asked the respondents whether they minded having to wear a mask at work, around 37% said they had no problems with the new rule. However, a further 36% said they would find it too much to do a whole day of work wearing a mask, and 13% said they don’t mind wearing a mask at work short-term, but would be less happy if the policy became long-term. 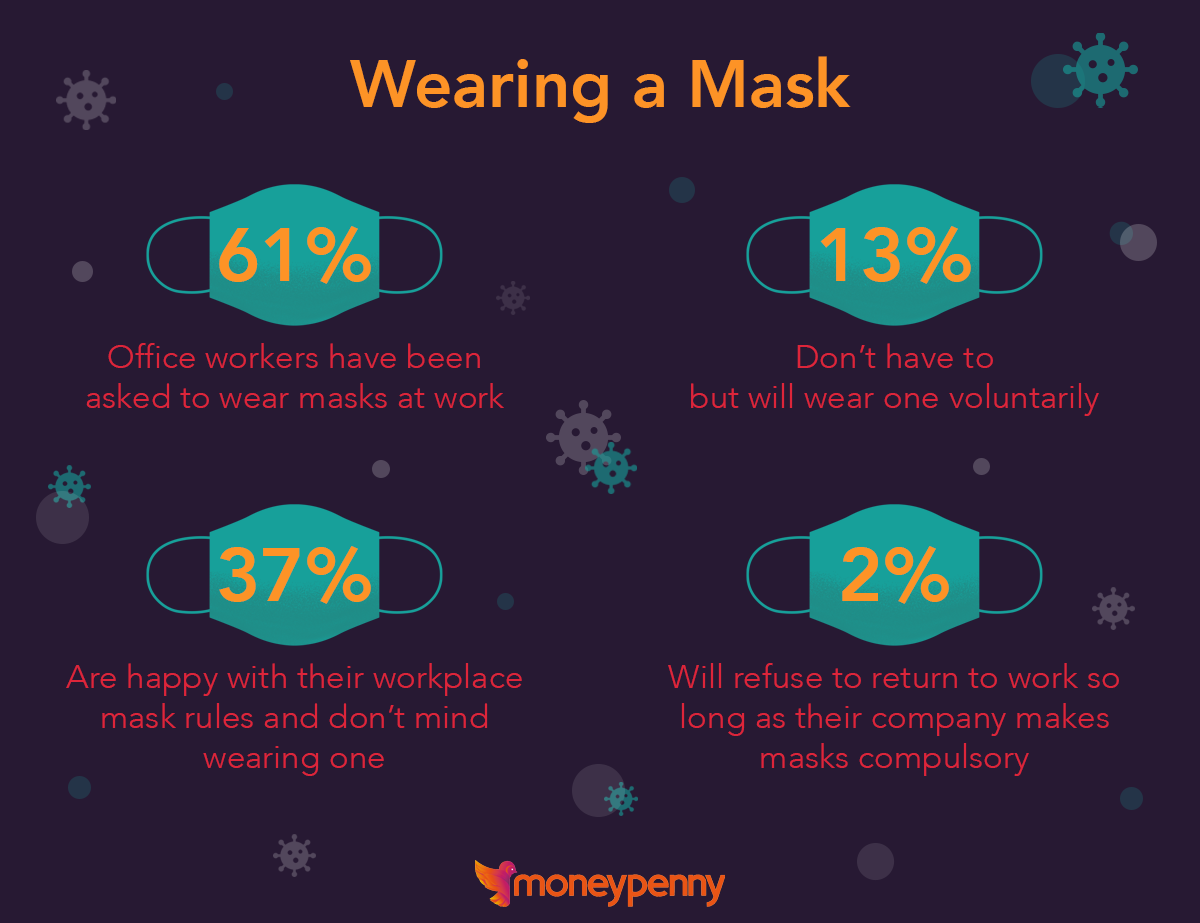 In larger cities, masks are slowly becoming compulsory, with 40% of those in London stating that their companies have already made masks mandatory for all areas of the office. Those in Leicester, the city with the first regional specific lockdown, have the highest rate of compulsory mask policies, with 58% saying that the policy had been enforced in their place of work already.

The national average of those that said mask wearing was voluntary and that they were not going to wear one was 26%, however in Wales, 36% said that they were going to choose not to wear a mask. Those in Yorkshire, the region that said they felt least comfortable with returning to work, were one of the most likely to wear a mask with 27%, despite it not being compulsory.

Do we trust our co-workers to social distance?

One of the biggest worries for many workers is trusting their co-workers to follow strict social distancing rules. We can see from our data that employers are putting measures in place to try and make social distancing as easy as possible. With 61% of workers saying they have already been introduced to staggered start, break and finish times, in order to keep workers away from each other.

However, 16% said that they still don’t trust their colleagues to social distance in the office, with Scotland’s workers being the least trusting, with 10% of workers stating they distrust team members. Those in the North East were the most trusting of their colleagues, with a huge 64% saying they trusted their teammates to keep to strict guidelines.

Part of office life includes sharing equipment and stationary, however post-Covid, these everyday norms are having to be reviewed.

The overall feeling is fairly mixed, with an equal number of workers flitting between being fine with and refusing to share office equipment and stationery. Some offices have even gone as far as banning the sharing of equipment completely, with 31% of those surveyed saying their management would not allow it.

Even the drink rounds have been called into question. Overall, 48% said they will make teas and coffees for their colleagues, however, of those, 40% will make one only for trustworthy colleagues that are close to them.

15% of those questioned said that their management does not allow them to make drinks for their colleagues and 38% strictly stated they will not do rounds at all.

Over half of East England office workers say they will now only make drinks for themselves, in contrast with the West Midlands, where 42% are most likely to do the rounds for their colleagues. 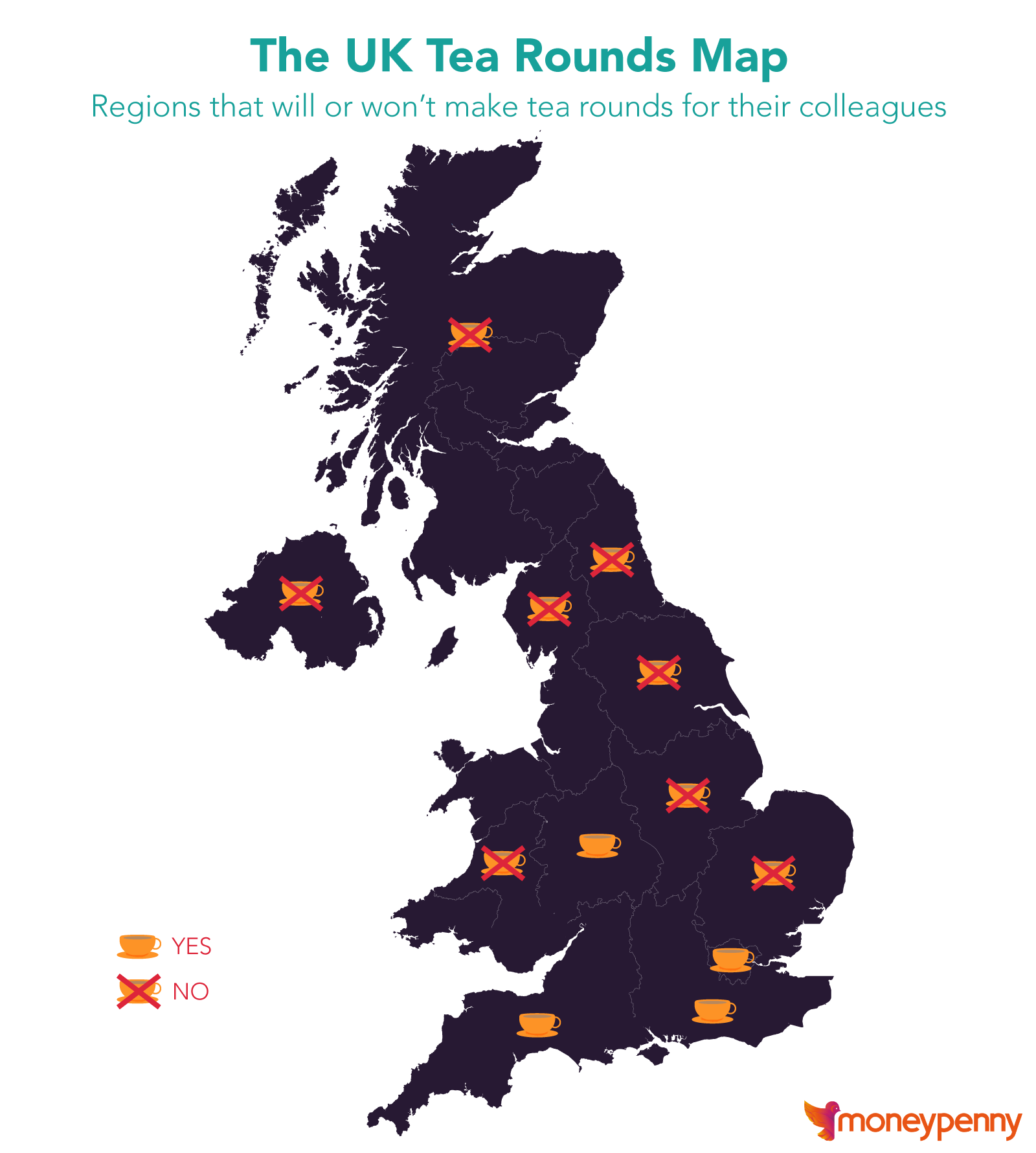 Workers are also worried about visiting their usual cafes, shops and other shared facilities whilst back at work. Over 35% said that they would not be visiting any onsite amenities when they go back, however regular lunch time haunts, such as sandwich bars and cafes still have a number of workers willing to visit (28%), even with strict social distancing rules in place.

There’s no denying that Covid has forced us to change the way we go about our daily life. However, it’s clear that there is still a way to go before people feel completely comfortable with working through the pandemic, and both employers and their employees need to step up and do their part to make offices safe again.