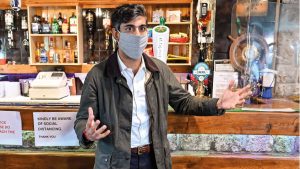 Despite the severity of the slump, so far we have not seen a tidal wave of job losses. Sure, almost every day there is a fresh round of redundancies at a retailer, restaurant chain or airline. But it is usually only a thousand or two. The latest statistics showed the headline unemployment total remained close to a record low, at only 3.6%, even if, rather ominously, the total number of hours worked showed a steeper decline, as did the overall number of people in employment. Even so, given the scale and the speed of the slump, far more people are still in jobs than you might expect.

How bad will it get?

The trouble is, that is going to change very soon. Chancellor Rishi Sunak’s hugely expensive furlough scheme has kept people on the payroll, but it is already starting to be phased out, and is due to come to an end by October. Firm will then have to decide whether they can afford to keep staff on. Lots of them will decide they can’t continue, or, if they can, to do so with fewer staff. The redundancies will start on an epic scale.

Plenty of people will argue that the furlough scheme should be extended, as it has been in other countries. Companies certainly still need help, and if a concert hall or beauty salon is shut because of government rules, there is a case to be made for supporting it financially. Against that, six months is not temporary, and we still have no idea when this crisis will end. It could be years. If businesses are no longer viable, we are not helping anyone by keeping them artificially alive. Either way, as furloughs end, joblessness is going to rise. If you add in the staff on furlough, 33% of the workforce is already unemployed, far more than the all-time UK record (24% in 1921, during the Spanish flu epidemic). It might not get that bad. Somewhere between 10% and 15% seems a certainty, however.

It is more than three decades since we saw so many people out of work. As a result, expect to hear about job creation schemes and subsidies for employers to persuade them to take on more staff, especially young people. Higher education will probably be expanded yet again to try and massage the numbers, and the government will no doubt spend a ton of money on roads, bridges, schools and hospitals to revive demand. It will all help. But in truth we can’t ignore the most obvious solution. Price.

Over the last decade, with a booming labour market, we have steadily pushed up the cost of staff. We have increased the national living wage at one of the fastest rates ever, and it is now one of the highest in the developed world. While the economy was doing well, there was nothing wrong with that. It increased earnings, especially for the least skilled workers, and the economy still created jobs at a record rate. It was a simple policy that created lots of winners, and apparently no losers. But suddenly the economy has changed. The cost of labour can no longer be ignored.

It’s time for a wage cut

Price is what balances supply and demand. If there is too much of something, the price goes down, and that pushes demand back up again. If there is mass unemployment, it is crazy to keep the living wage so high. At a lower rate, a few employers would be tempted to keep people on. A socially distanced restaurant, for example, might not be able to pay waiters the same rate as before, but could break-even with lower wages. The same might be true of a shop, or a hotel struggling with fewer customers. At the same time, the new businesses starting up would find it a lot easier to hire the first one or two people if they cost a little less.

We should temporarily lower the living wage from £8.72 to £7. At the same time we should look at a round of deregulation of the labour market, and free up the gig and hustle economies too, because it is a lot easier to create flexible, part-time work than full-time jobs. Sure, that is going to be tough. And it is certainly not going to be popular. But the hard truth is that locking down the economy has made us a lot poorer. The only way to balance supply and demand is to cut prices. That is as true of labour as it is of anything else.