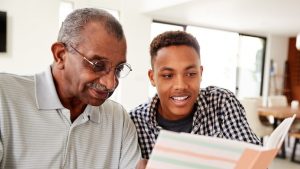 Black, Asian and minority ethnic people in their 50s and 60s are more likely to earn less than their white counterparts, according to research from the Centre for Ageing Better, the Institute for Public Policy Research and University College London.

BAME groups were more likely to be in the poorest fifth when compared with the white population, the researchers found, and while the average weekly income of white and Asian groups was very similar (£499 and £500 respectively), it fell drastically to £397 for black people aged 50-69.

The research also broke down by ethnicity whether people in this age group owned a home, whether this was good quality housing, and whether they lived in a deprived area. Nearly half of white people in their 50s and 60s (47%) owned their home outright, compared with 33% of Asian and just 13% of the black community.

Almost a third of black and a quarter of Asian people lived in the most deprived areas compared with just 16% of the white population.

Another focus was wellbeing, exercise and diet. Almost six in 10 white people (59%) and 66% of the BAME population were currently engaging in one or more unhealthy activities such as poor eating habits or excess alcohol.

Paola Zaninotto from the Institute of Epidemiology & Health Care at UCL said this could mean BAME people were placing themselves at disproportionate risk.

He said: “An increasing number of black, Asian and minority ethnic people are now approaching later life and our results show that compared with white people they are facing challenges across a large number of areas in their life, putting them at risk of missing out on a good later life.”

Anna Dixon, chief executive of the Centre for Ageing Better, added that not enough was understood about the diverse experience of different ethnicities as we aged, because not enough data was collected.

“Our new research shows that ethnic inequalities are deeply entrenched among the generation approaching later life, with those from black, Asian and minority ethnic backgrounds facing disadvantages across many areas of life.

“As older generations become increasingly diverse, it’s vital that these inequalities are tackled so that no-one misses out on a good later life. This means better paid work, more affordable and better housing, and targeted measures to reduce ill health for people approaching later life from BAME backgrounds.”

Anna Round, senior research fellow at the IPPR, said: “All too often, we hear lazy stereotypes applied to everyone in middle or later life. But these findings show stark differences within this age group – for example in health and in financial wellbeing.

“We need a better understanding of what lies behind these and many other differences, including the inequalities associated with ethnicity that emerge from this research. And we need to collect and analyse the data to build our understanding. That’s essential if we are to work out how everyone can have the best chance of a decent quality of life as we get older.”