Almost half of managers think staff are at risk of burnout 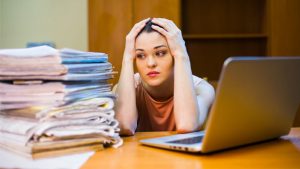 Nearly half (47%) of managers think their employees are at risk of burnout following changes to their work patterns because of Covid-19.

This is according to a survey conducted by recruitment firm Robert Walters, which also found more than a third (36%) of UK employees said their mental health and wellbeing had suffered because they had been working longer hours.

Eighty-seven per cent of employees felt under pressure to keep productivity levels high while working from home, delivering a 35% increase in productivity since lockdown restrictions were imposed.

Earlier this year the World Health Organization officially recognised burnout as a medical condition in its 11th edition of the International Classification of Diseases.

WHO defines burnout as “a syndrome conceptualised as resulting from chronic workplace stress that has not been successfully managed”. It is characterised by three dimensions, including feelings of energy depletion or exhaustion; increased mental distance from one’s job, or feelings of negativism or cynicism related to one’s job; and reduced professional efficacy.

Robert Walters’ director of professional services Sam Walters said: “There is no denying that mental health and wellbeing has been on the agenda for most employers – even pre-Covid.

“Increasingly we were seeing offices be re-designed ergonomically, work health insurances enhanced to provide mental health support, and training provided to managers to help understand and deal with employees suffering from poor mental health. Many of these policies were geared around personal mental health issues – such as depression and anxiety – which have an impact or were exacerbated by work.

“Burnout is an entirely different and recently recognised condition which, unlike other mental health issues, can be directly linked to work. As a result, employers have a crucial and central role to play in order to ensure their staff do not reach the point of burnout.”

Robert Walters said there were six key areas which can lead to or exacerbated burnout: