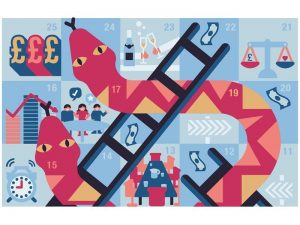 The speed of job progression for young employees has gradually been slowing since the 1950s.

to new reAccordingsearch from the Institute for Fiscal Studies, men born in each decade since the 1950s have started their careers in occupations further down the wage ladder than their predecessors, despite rising education levels.

They have also climbed the job ladder more slowly than men in prior decades, a trend that has been found to be compounding, rather than offsetting, an increased tendency for young people to start out in low-paid roles.

The same trend has been observed in young women born since 1985. When entering the job market, their starting position was more similar to that of women born in the 1960s than those born earlier in the 1980s.

In the current climate, the trend for slower career progression in young people emphasises the rising challenges these groups are facing when entering a job market in a time of recession.

Rebekah Tapping, group HR director of Personal Group, told HR magazine: “Many young people go into entry-level roles accepting a lower salary so they can build experience and demonstrate what they are capable of.

“In the current economic climate, however, employers may not be in a position to fast-track exceptional talent.”

As such, Tapping suggested that HR leaders find new ways to make sure their younger staff are appreciated like, for example, through wellbeing programs.

She added: “Companies must take a longer-term view on this to protect high-potential and high-performing talent. It might not be possible for young workers to climb the career ladder right now, but most people will value and appreciate a level of transparency around future career progression.”

Given the prevalence of young people working in entry level roles for sectors such as hospitality and retail, HR consultant Guy Pink said some of the IFS’ findings were unsurprising.

Yet he argued the report does raise the question of whether or not the educational system is actually producing people that are able to enter the job market.

Speaking to HR magazine, Jacques Samama, head of people at waste management SME London Energy, agreed with Pink, highlighting the importance of apprenticeships and traineeships in making sure young people are prepared for work.

He said: “In my view another challenge may be linked to the disconnection between company’s needs and courses at university/school.

“A better exposure to company through work placement for example and at an early stage would help students to be properly guided throughout their studies.

“A better connection throughout partnerships between universities and schools and all types of companies is also key.“

As job vacancies are now starting to be flooded with applications, with an average of 20 people chasing each vacancy in disadvantaged areas of the UK, there is an opportunity, Pink said, to upskill within an organisation, and for employers to open up their talent pipelines.

He added: “I guess my concern is that many employers will just revert back to type and actually take people that are more experienced than perhaps somebody who is just starting on the career ladder.

“The whole approach to bringing people in is a big challenge for HR colleagues and the way that we can use this as an opportunity to actually say ‘experience, education and skill sometimes are not important, can we not be recruiting on a competency or a values based approach [instead]?’”

Ultimately, he said, it comes down to the level of influence HR leaders have had in their organisations over the past few months.

Recognising the vulnerability of young workers, the government has introduced the Kickstart Scheme and is incentivising employers to employ more young people through apprenticeships and traineeships.

Yet the CIPD has warned that such schemes will need full-employer buy-in if they are to be successful.

In its plan for the government, The Institute of Student Employers (ISE) also recommended the Treasury introduce further measures, including a national insurance contribution cut for the under 24s, to help reduce the impact on the younger population.