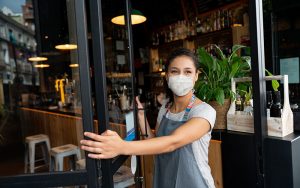 As the effects of the pandemic continue to be felt, recruiters can expect a surge in applications for job vacancies, especially in the hard-hit hospitality sector, if the experience of one company in Manchester is anything to go by.

BBC news reports that 20 Stories restaurant based in the Spinningfields area of Manchester received almost 1,000 applicants in a single day after it advertised for a receptionist.

Carol Cairnes, director of people at the restaurant’s owner D&D London, told Radio 4’s Today programme that she was shocked by the number of applications for the job that was advertised last Monday.

“The next day James, our head of talent, went to look at applications and was amazed to find that in less than 24 hours we had 963 people apply.”

Normally for such a role they would expect at that stage to receive about 30 applications, she said. “Going through the candidates who applied, we could see there were a lot of very talented and highly-qualified people that applied for the role, including some restaurant general managers.”

Last week, recruiter.co.uk reported how rising levels of unemployment and fewer jobs vacancies was causing a big jump in the number of job applications for each job vacancy, albeit in some parts of the country they were seeing greater competition for jobs than others.

Evidence of rising competition among jobseekers comes after the latest JobsOutlook produced by the Recruitment & Employment Confederation (REC) in partnership with Savanta ComRes revealed a slight increase in businesses’ hiring intentions between June and July, rising to a net level of +4 in the first half of July. In contrast, one in six (17%) of employers had made redundancies in the year to July, up from 9% in the year to June.

Neil Carberry, CEO of the REC, said: “It’s good to see employer confidence rising as the lockdown measures ease – at this stage we would expect things to be getting better month-by-month. Even at times like these, there are always opportunities out there for jobseekers. But businesses are still very worried about the overall outlook for the economy, and while some are hiring, many are having to make tough decisions around laying people off.”