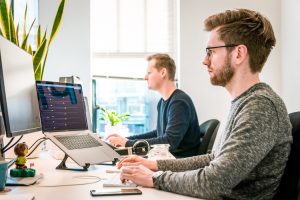 The number of job postings across the UK continued to rise as lockdown measures were eased in early July, according to the latest figures from the Recruitment & Employment Confederation (REC).

The number of job postings across the UK continued to rise as lockdown measures were eased in early July, according to the latest figures from the Recruitment & Employment Confederation (REC).

While this growth was seen across the whole country, it was most pronounced in the north-west of England. Between 22-28 June and 6-12 July, the number of active job postings in the region increased by over 17,000 to 125,000. In particular, Mid Lancashire has continued to see a surge in job adverts, with a rise of 37.4% in early July. This includes a notable increase in postings for web designers and developers, programmers and software developers – reflecting the strong growth in digital commerce we have seen during the lockdown.

This increase in job adverts for IT professionals was seen across the UK. Postings for web designers and developers increased by 15.5%, and there was a rise of 6.6% for programmers and software developers. Other job roles which saw growth in job postings included graphic designers (+11.3%), sales administrators (+9.9%), LGV drivers (+9.7%) and carpenters and joiners (+8.5%). There was also a 9.4% increase in demand for clothing designers, potentially in response to non-essential shops reopening and the increase in online shopping during lockdown.

Meanwhile, demand for both primary and secondary school teachers continued to decrease (by 4.3% and 4.6% respectively), as well as dentists (-7.1%) and fitness instructors (-8.8%).

“Business confidence has slowly been rising as lockdown measures have eased – though the recovery has a long way to go. This is reflected in these job postings figures. While many businesses are facing tough decisions on staffing this week, there are other firms where hiring is still happening, and their numbers are growing. It is encouraging that we are seeing indications of growth for roles like IT professionals and designers, which will be critical for many firms as they adapt to meet the challenges of a changed market.

“However, we are not out of the woods. The economy will not return to normal levels for some time. Firms are looking to government for further guidance on how they can begin to open up more fully, including returning to offices – as long as it’s safe to do so. This would deliver a further boost in confidence and get Britain’s world-leading services industries going.”

“As Neil highlighted, it’s positive to see a continued rise in job posting activity over the last 2 weeks in certain sectors, locations and occupations – albeit this is of course tempered with a significant rise in redundancies and claimant counts across a number of UK industries.

“The next 2-3 months are going to be critical to understand the true impact of the furlough scheme and wider government support programs. We believe recruitment marketing activity will continue to be a useful lead indicator to predict how and where the economy is adapting to market conditions – however it’s also crucial to understand changes in the supply side of the labour market in parallel, which is why we’ve recently introduced this data into Emsi tools.

“Recruiters will play a key role in the months ahead as we all try to keep Britain working!”