Three ways to deal with uncertainty in the Covid-19 crisis 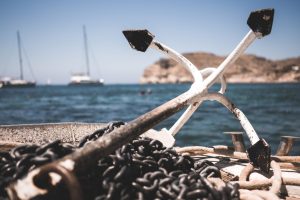 AS THE GOOD SHIP HUMANITY CONTINUES TO BE TOSSED ON THE RAGING SEAS OF THE COVID CRISIS, WE CAN BE FORGIVEN FOR WONDERING WHEN WE CAN LOOK FORWARD TO A BIT MORE CERTAINTY IN OUR LIVES AGAIN.

We’d all love to be able to go out without the fear of contracting the virus, be in work and social situations again without the need for social distancing,feel secure in our employment and financial situation.

I’m sure you’ve worked out by now that despite our best hopes, we won’t be putting into port anytime soon and that the waters will continue to be very choppy for a good while yet. A vaccine appears to be a very long way away and the economic effects are perhaps only just beginning to be felt.

However, there is perhaps a way for us all as individuals and organisations to bring back a bit of certainty in our lives. By dropping anchor.

Anchors, as the name suggests, are figurative ways we can bring stability and certainty to a situation. It’s so easy for us to feel overwhelmed in tough times which of course can lead to stress, panic and poor mental wellbeing. By dropping anchor, we can start to feel calmer and give ourselves breathing space to think through a crisis.

So, what are some of the anchors we can use to feel calmer at a personal and organisational level? We’ll look at three of them here.

Your Circle Of Control

The first is acting in your circle of control. It can perhaps be best described in the prayer which hung in our kitchen growing up: “Grant me the serenity to accept the things I cannot change, the courage to change the things I can and the wisdom to know the difference.” In psychological terms it’s known as acting in your locus of control i.e. focussing only on the elements of a situation which you can control. In the current crisis, what you can control might, for example, be your attitude to it. So, if you adopt an attitude of, “a crisis can bring opportunity”, where are the opportunities for you and your organisation?

Note that this does not mean that terrible things aren’t happening or that you should ignore them. What it does mean is that so much of a crisis is outside your control and will happen anyway so the best thing to do is focus on what you can change, not on what you can’t.

The Lesson I Learned

I learned this lesson myself a number of years ago. On waking up one morning, I realised my health had gone off a cliff. Just the effort involved in going to the bathroom and back, left me feeling utterly exhausted, Unbeknown to me at that stage, I had developed M.E. or Chronic Fatigue and it started a journey of ill-health which was to last 13 years. However, there was one morning months later which became a turning point for me. It was the morning when I learned to ask myself, “What can I do about it?”

Everyone had left the house and I was left alone in bed. My fatigue had got worse and worse and yet again I had no energy to read or even listen to the radio. I cried a lot as depression sank in. At some point though, I realised I was on a slippery slope and needed to snap out of it. This was when I grabbed a pen and paper from next to my bed and wrote down, “What can I do about it?” I  then made a list of small practical things to do which could help me and which were within my control. For the first time in months I felt calm return as I took back an element of control over the storm of symptoms which had hit me. I was never to get as low again.

How Your Values Will Bring Stability

The second anchor to help bring some stability back to your life is to rely on your values.

In a week when so many people have lost their jobs and tough decisions have been made, personal or organisational values may seem a luxury. However, acting with integrity and according to the human being you are, is fundamental to coming out of a crisis without regrets. Values are easy in good times, it is in a crisis that they will be tested and in the future that you will reap the benefit.

So many people have shown their true colours during lockdown and reached out to help others. We have seen people connecting with family, friends and neighbours in ways that were unforeseen months ago. Hundreds of thousands volunteered to assist people shielding. Countless others have provided their services for free just for the sake of helping others.

At the same time, living according to values can be hard. They can get in the way of what we urgently need to do. I know I’ve not sat outside with my elderly neighbour as much as I said to myself I would do. Yet, when I have seen her, I experience a joy from her company and from knowing that I’ve done the right thing.

Even in this troubling week, people have placed their values above the convenient. Paul Cook, the Wigan Athletic manager, spent a whole day ringing the 75 employees made redundant as a result of the club’s administration. On a match day, when he had a million other things to do.

How can you put your values above the urgent, the convenient and the downright wrong? What can you do that is inconvenient but necessary to living according to your values? If you want to be proud of yourself then it’s a fundamental part of dealing with a crisis.

Strengths In A Time Of Crisis

The third anchor we can use is to rely on our strengths. It’s so easy to lose focus of what we’re good at when a crisis hits. James Caan of Dragons’ Den fame, has talked about how he lost focus on his and his company’s strengths during the 1992 recession. He started looking for other opportunities and lost sight of the fact that his recruitment agency was a market leader for a reason. It was only when his firm was about to go under that he re-focussed on its strengths and turned it round.

While the storm continues to rage, it’s maybe time to think about how you can stabilise the ship, drop anchor and bring some calm back to your organisation and your life. By relying on your strengths, values and whatever else is within your control, you will find more stability in your life, even in uncertain times.

Keep calm and be true to yourself.