8.4 million furloughed as Sunak prepares to wind down scheme 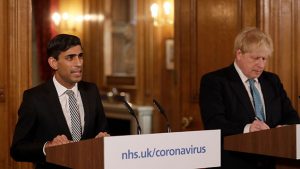 Chancellor Rishi Sunak is likely to signal this week that the Coronavirus Job Retention Scheme is winding down and is set to announce that the government will no longer allow businesses to furlough employees.

He is also expected to specify the level of contribution employers will have to make from August if they want to continue using the scheme.

Since the start of May the number of furloughed employees has risen by a quarter to reach 8.4 million, according to Treasury figures. And HMRC has revealed that more than £6.8bn has been claimed via 2.3 million applications from those who are self-employed and unable to work.

The Treasury has also granted more than 43,000 businesses about £9bn in coronavirus business interruption loans to support them through lockdown. A further £18.49bn has been granted in “bounceback” loans to 608,000 small businesses.

It is thought that from 1 August companies will be asked to start making a contribution of about 20% to the wages of furloughed staff, who are currently paid 80% of their normal salary up to £2,500 a month.

Government ministers and business leaders recognise that when the furlough scheme is wound down some of those workers currently furloughed will not have jobs to go back to. The plan is to encourage firms to at least bring those workers already furloughed back part-time to ease them back into business while reducing the cost to the taxpayer.

Last week Sunak told the Lords Economic Affairs Committee that it was not obvious that there would be an immediate bounce-back. He added: “Obviously the impact will be severe. We are likely to face a severe recession, the likes of which we have never seen.”

Michael Lassman, London chairman of the Federation of Small Businesses, said the furlough scheme had been “a lifesaver for many small businesses, there’s no two ways about it, and if they need to they should be able to continue to access it. If there’s a cut-off that applies too soon that is going to be a concern”.

Meanwhile, new figures from the Office for National Statistics (ONS) indicate that people with low household incomes have been spending more time doing paid work since the lockdown began than previously. Those with monthly household incomes of up to £1,700 have spent an extra 21 minutes a day on average doing paid work, compared with a drop of about 32 minutes for those on monthly incomes of between £1,700 and £3,300.

The ONS said the increase in working time for people on low household incomes could be because they were more likely to be in jobs that could not be done from home and have had to continue going into work.

Various aspects of life in the UK between March 28 and April 26 this year were examined by the ONS in the study and contrasted with data from 2014-15. It also found that men had reduced their work and travel time by one hour and 37 minutes a day on average, compared with one hour and two minutes for women.

Young women have been disproportionately affected by the lockdown, said a new report by the Young Women’s Trust. It claimed that more than 78% of those who had lost their jobs since the crisis began were women and two-thirds were aged between 18 and 34.

The report also made the point that coronavirus had dramatically increased the amount of unpaid work being done in communities across the country, with many people supporting those who have the virus and vulnerable people who are shielding. There had also been a vast increase in childcare and home schooling since the closure of schools and nurseries.

It said: “Prior to the crisis, women carried out 60% more unpaid work than men on average, so it is likely women will take on the majority of additional unpaid care now. Our research finds that young women are taking on more unpaid care work.”