50 years since Equal Pay Act: 29,000 claims made for gender pay discrimination still being made every year 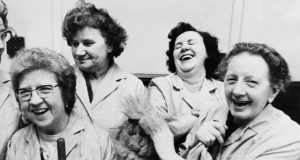 The 1970 act enshrined the legal principle that men and women should receive equal pay for equal work.

A large number of workers are claiming their employers are illegally paying them less than colleagues in similar roles, according to research released as the Equal Pay Act enters its fiftieth anniversary.

The act enshrined the legal principle that men and women should receive equal pay for equal work, and was given royal assent on 29 May 1970 in response to a strike led by sewing machinists at Ford’s Dagenham plant.

The Act has since been replaced by the 2010 Equality Act.

Nevertheless, 50 years after it’s creation, cases brought before employment tribunals show no sign of slowing, according to the global law firm DLA Piper.

Since the 2007-08 financial year, employment tribunals in England and Wales have received more than 368,000 complaints relating to equal pay – averaging almost 29,000 complaints a year.

Across the whole period, equal pay claims made up 12 per cent of all cases, which include other complaints such as unfair dismissal, discrimination and unlawful deductions from pay.

Jane Hannon, DLA’s employment partner said: “Whilst the concept of equal pay for equal work has been around for 50 years, the consistently high number of employment tribunal claims indicates that this is an issue which some employers are still grappling with.”

The tip of the iceberg

Ms Hannon added: “The employment tribunal statistics may only be the tip of the iceberg – it is not clear how many of the claims that are withdrawn before hearing – some 61 per cent of cases – are actually withdrawn in return for a financial settlement.

“In our experience, in non-unionised environments, the number of equal pay claims being brought is still comparatively low and many employers do not realise that they have an equal pay issue until pay is challenged by an employee.

“This is all the more reason for employers to keep equal pay front of mind when reviewing pay and conditions and to ensure that if there is any differential for employees doing like work, work rated equivalent or work of equal value, there is a genuine and material factor to justify this.”

Last year a court of appeal ruled that Asda‘s lower-paid supermarket store staff, who are mainly female, could compare themselves to higher-paid, mostly male warehouse workers in pay claims.

The original Ford strike in 1968 was called when female workers were outraged by a pay structure which clearly discriminated against them.

The Equal Pay Act was created following a meeting between the strike leaders and employment secretary Barbara Castle, who negotiated a deal to end the three-week strike.

Original article ’50 years since Equal Pay Act: 29,000 claims made for gender pay discrimination still being made every year’ Written by Charlie Duffield Published by inews