The COVID-19 pandemic has caused unprecedented economic upheaval, but most British workers feel their employers have treated them well during this difficult time – although some sectors show far higher satisfaction levels than others

YouGov research reveals that British employees are extremely positive about how their employer has treated them during the COVID-19 pandemic, with 85% rating their company’s treatment of staff as ‘excellent’ (40%) or ‘good’ (45%).

More noticeable differences are seen when the same question is asked of managers and non-managers. Senior managers and directors are most likely to report positive behaviour from their employer, with almost half (49%) rating their employer as ‘excellent’ and a further 43% ‘good’.

Only 34% of those without any management responsibility say their treatment was ‘excellent’ and 47% ‘good’. In fact, some 18% rate their treatment as ‘poor’ or ‘very poor’.

We also see large differences among sectors. While 57% of those in education say their treatment has been excellent, this slides to 54% among financial services workers, 49% of those in IT or telecoms, 33% of manufacturing, and 31% of both retail workers and transport and distribution staff. 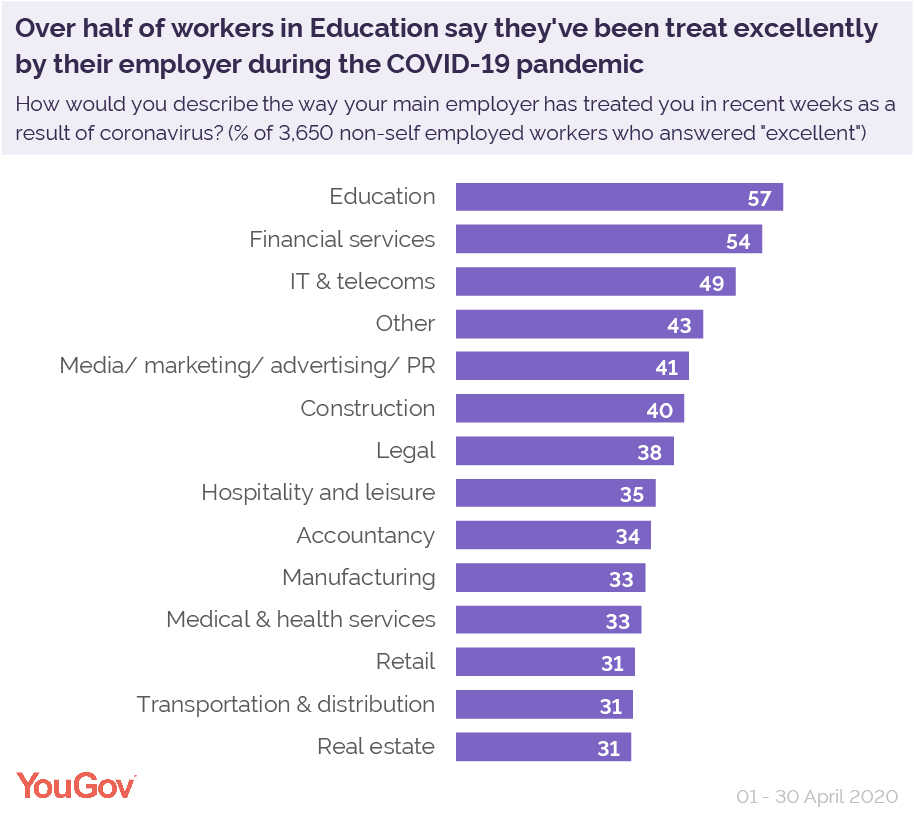 Some 84% of British employees feel their employer’s actions in the face of the virus have been positive, with over a third (36%) saying the actions taken were ‘excellent’. Just 16% report ‘poor’ or ‘very poor’ behaviour from their organisation.

But we once again see that senior managers and directors are more likely to agree that the actions taken by their employer have been positive (92%), whilst middle managers (86%) and workers without management responsibility (80%) are slightly less supportive.

With regard to large companies who have lost most of their day-to-day business, Brits believe that their employees should either be furloughed (37%) or kept on at full pay but loaned out to the NHS or other areas of national need (28%). Others feel staff should be kept fully employed and fully paid, and should be encouraged to work on whatever tasks are available for them (18%). Only 4% believe employees should have their pay cut until normal work resumes, or be laid off altogether from their jobs (2%). 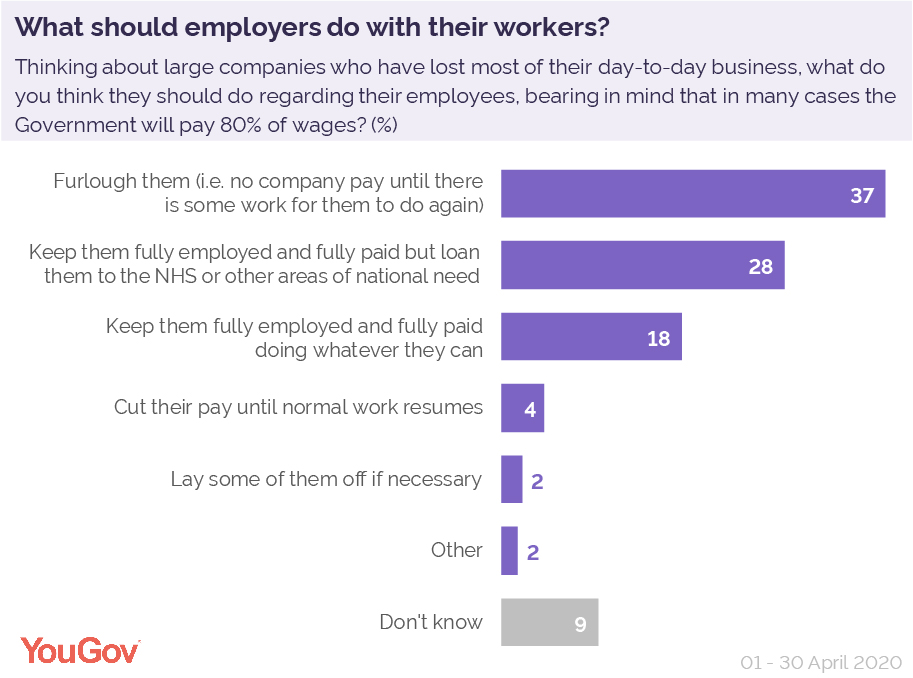 When asked about the behaviour of various sectors within the UK economy and how they have responded to the pandemic, Brits responded most positively towards supermarkets (87%), food & drink manufacturers (75%) and pharmaceutical companies (73%).  Those working in each sector (public, private, and third) generally had a similar level of agreement.

But just one third of Brits feel that airlines have responded well to the outbreak (32%), with around half describing their behaviour as ‘poor’ (49%).

In the same vein, Brits are more likely to think holiday companies have behaved poorly rather than well, at 41% compared to 33%. Opinions are most polarised over the behaviour of the media, with 47% feeling companies in this industry have responded well, and a further 44% believing them to have responded badly.

Brits volunteered the following large companies and organisations as ones which have behaved particularly well throughout the outbreak: Sainsbury’s (4%), Morrisons (3%); Asda (3%); Aldi (2%); Dyson (1%); McDonald’s (1%), and Waitrose (1%). One in ten respondents highlighted all major supermarkets as behaving well throughout the pandemic (9%). Interestingly, despite the popular Clap for our Carers campaign, designed to highlight the work of key workers such as those in the healthcare sector, Tesco scored slightly higher (6%) here than the NHS (5%).

When asked about the actions that should be taken by the Government to ensure companies are better suited to handle any future crises, one third felt that company directors specifically should be made more accountable for their firm’s ability to deal with such events (33%). Also popular was making companies pay into a fund designed to provide protection in future (31%) and making companies release an annual statement about how they can deal with a future pandemic (29%). A quarter feel that companies are not to blame, or already pay enough tax and have enough regulation (26%).

Thinking to the future, we asked Brits how they think companies will change, if at all, as a result of the Coronavirus pandemic. Just 6% of Brits predict no real changes in company behaviour or processes, whilst a majority feel that more organisations will shut stores and move their businesses to online-only (55%). 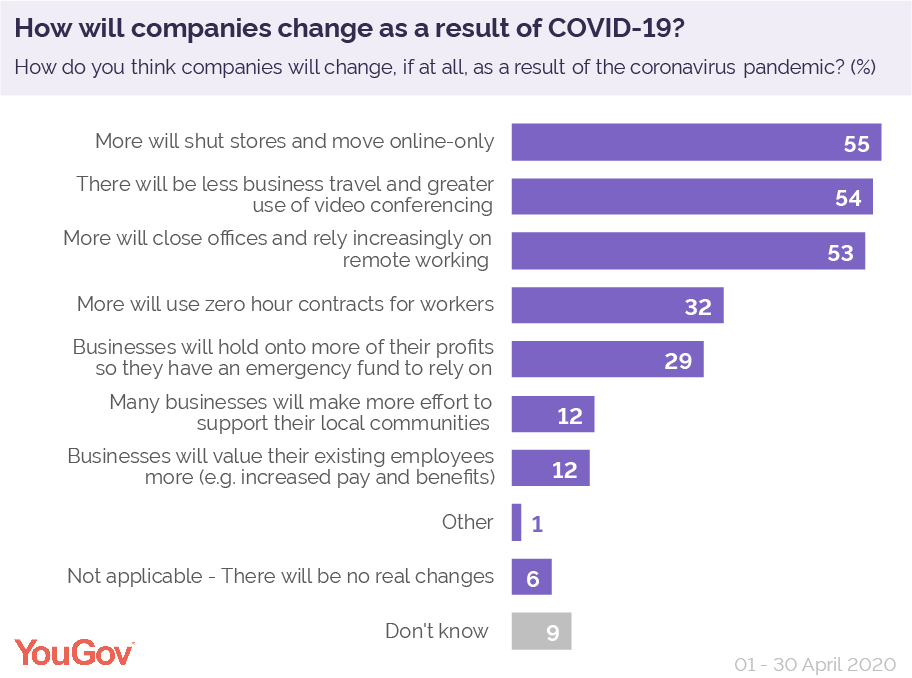 Alongside this, Brits predict business travel will, in some cases, be replaced by video conferencing (54%) and that remote working will be relied on far more for many businesses (53%). A third also expect to see companies implement zero hour contracts for workers (32%), and 29% believe profits will be retained by businesses in future to allow for an emergency fund in times of crisis.

Fewer Brits predict attitudinal changes from companies in the UK, with just 12% believing that businesses will value their existing employees more, and the same amount predicting companies will make more of an effort to support their local communities.