Keeping the lights on during a dark time: is tech the answer? 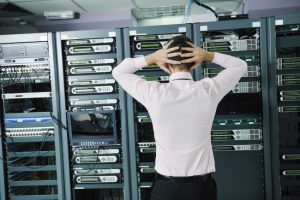 With companies furloughing staff, how can technology ensure business continuity?

Naturally, the developments with Covid-19 mean that this is an incredibly difficult time for some businesses. The outbreak has imposed mandatory remote working practices and many businesses are facing the prospect of having to furlough their workforce in order to protect jobs and the business for the future. By furloughing staff, it means that there is effectively a skeleton crew left to keep the business afloat, a hugely daunting task for anyone trying to steer their business through the rest of the year. However, process automation might just be able to help steady some of those spinning plates.

According to EY, nearly half of the top bosses in 45 countries across the world are speeding up plans to automate their business processes as workers are forced to stay at home. For instance, Dublin Hospital, among many supermarkets and other essential services, are using software robots during the pandemic to support workload. However, looking for solutions is one thing; but being fast to deploy these solutions is key. Ultimately, businesses have been forced into adapting, and adapting fast. More and more organisations are needing to consider implementing off the shelf solutions to keep their business running. This includes technology like robotic process automation, which can help to alleviate the business pressures, whether it be a reduction in sales, improving communications, unblocking system constraints, maintaining business momentum, removing risks or enhancing customer engagement.

Robots in a time of crisis

Around half of Britain’s companies are expecting to furlough most of their staff at a cost of up to £40 billion to the Treasury. In many instances, businesses are furloughing a large portion of their workforce and leaving the skeleton staff to deal with the same or a higher demand of work.

In other cases, they have skeleton teams which they have on rotation, but both scenarios pose interesting challenges. These teams are spread thinly across the entire business operation, and, if in the (likely) scenario they will be off sick at some point, the business hasn’t had the time to think about implementing a back-up plan or a process to fall-back on. This is where some are turning to technology for resilience.

Up until now, the idea of technology being used to ‘back-up’ teams and processes has been approached with caution. The ambivalence of doing so has stemmed from the mentality that technology will one day replace workforces, rather than aid them and work harmoniously for the better. Over the last few years, the attitude towards adopting technologies has changed substantially. It stems from the idea dating back to industrialisation; when we adhere to societal and economic change, it is almost always at the expense of human jobs. The evolution of processes naturally sees displacements take place, from bank tellers in 1966 to tractors replacing 36 per cent of farming jobs in the early 1900s.

The same is happening right now, and, as with all new technological developments, there’s a natural shift in the ways companies apply them, at a time when people socially and culturally come around to the idea. Cryptocurrencies, such as bitcoin, were initially something largely associated with the dark web. However, in recent years, blockchain application has increased and investment in the space is growing as more see its value.

Artificial Intelligence, likewise, whilst still undeniably a term misused and misinterpreted, is gradually becoming less of a ‘hot topic’ and more something companies see real purpose worth in. For example, things like Robot Process Automation (RPA), is one example of technology which can work alongside people, allowing them to automate a high volume of repetitive tasks. These are tasks which can be a time consuming and resource hungry hindrance on productivity – especially during the current climate – and to be free from, would be a blessing and would allow them to focus on tasks of higher value.

So, alongside seeing natural shifts in the discourse around technologies such as AI – crises like the current one is only speeding up this process. Digital transformation was always inevitable, but we’ve had to adapt in a matter of weeks, rather than years.

The importance of connection

Since the outbreak of Covid-19, most teams all around the world have been faced with a new way of working which sees teams working completely digitally over chat applications and video calls. It is also possible to create and deploy RPA solutions remotely, covering everything from remote process discovery, automation development, through to testing and deployment.

For businesses which might be based somewhere like London, but have workers across Europe, for example, this could be a blessing. Employee engagement might be a challenge for some businesses, but a strength for others. Teams are encouraging engagement more than they ever have done before.

This can result in a more flexible environment, where collaboration is at an all-time high, and employees are scaling resources depending on their own demand. Things like AI and RPA can be the cherry on top of the cake for those looking to thrive during a time when the odds were initially against them.

Of course, once this is over, it’s not going to be like a switch. Things aren’t going to immediately go back to normal; economies will have to ease back into an equilibrium. However, it’s clear that our ways of working will never be the same again.

However, many businesses don’t have the luxury of making the most of a bad situation. It’s predicted that almost 11 million workers in the UK could be put on furlough. And so, economically, it’s clear that the impact of this could be astounding.

What we are essentially seeing right now is a decade of technological transformation being concertinaed into a couple of months. Businesses have needed to turn to technology to survive and stay connected.

Once all of this is over, companies will be forced to evaluate their ways of working. For instance, is an office based in central London really necessary, if the entire workforce can stay in-touch and potentially be more productive working remotely? And if they do return to their physical offices, what does that transformation back into normality look like?

Original article ‘Keeping the lights on during a dark time; is tech the answer’ Written by Chris Porter and Published by