UK firms furlough over a million workers due to coronavirus 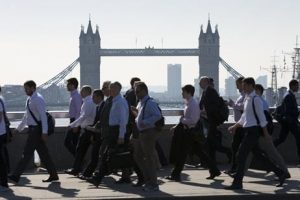 LONDON (Reuters) – British employers have put more than a million staff on temporary leave due to the coronavirus, finance minister Rishi Sunak said, reporting a flood of applications since the government’s costliest programme to support the economy opened.

The scheme will pay 80% of employers’ wage bills until the end of June for staff suspended during the coronavirus lockdown, and it received 140,000 applications from firms in the first eight hours it was open on Monday.

“The grants … will help pay the wages of more than a million people – a million people who if they hadn’t been furloughed would have been at risk of losing their jobs,” Sunak said at the government’s daily news conference.

Businesses that apply by Wednesday should receive money before the end of the month, when wages are often due.

Sunak again refused to estimate the total cost of the programme, but the government’s budget watchdog said last week it could reach 42 billion pounds in just three months and cover 30% of the workforce.

This is based on the watchdog’s projection that Britain’s economy will shrink by 35% during the three months to June due to lockdown restrictions.

Sunak said the scheme would help ensure the economy could return to normal more quickly when COVID-19 restrictions end.

Another government programme to underwrite loans to businesses with a turnover of under 45 million pounds had helped 12,000 businesses, Sunak said, up from 6,000 last week, when there was a backlog of more than 20,000 applications.

Bank of England Governor Andrew Bailey said on Friday that banks needed to speed up lending under the programme and that it would help if the government underwrote 100% of lending to the smallest firms, removing the need for banks’ own credit checks.

BoE chief economist Andy Haldane said on Monday this approach had worked in other countries such as Germany, though it was ultimately a political decision as it would increase taxpayers’ potential losses if the loans are not repaid.

But Sunak said on Tuesday he was not persuaded, and that Britain’s overall support package for businesses – including the wage support programme – was more generous than most other countries’.

“Where they have used loan guarantees that are different to ours they have done it partly because they are not doing some of the other things we are doing for example the furlough scheme,” he said.