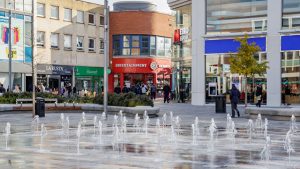 The nationwide effects of the coronavirus on jobs will be uneven and localised with towns more dependent on vulnerable sectors being hardest hit.

Analysis by the Centre for Cities thinktank has found that Crawley in West Sussex has the highest risk of job losses in the UK, with at least half of all jobs likely to be furloughed or lost, because of its status as a service town for the travel and aviation industry centred on nearby Gatwick.

With just under 20% of jobs in travel and aviations, compared with 1% on average in other large towns, the thinktank classified more than 53,000 jobs as vulnerable and very vulnerable in Crawley, of about 94,000 in the area.

Luton and Derby (where aero engine manufacturer Rolls Royce employs 12,000 people), which also have large proportions of workers in aviation, will also suffer major job losses, the analysis forecasts, with more than 40% of jobs being vulnerable. Areas of London closest to Heathrow with concentrations of aviation jobs would be hit similarly.

Researchers also looked at the exporting base of each city or town, and the proportion of exporting jobs that were most vulnerable. Using this methodology identified Oxford, Worthing and Bradford as the cities least likely to face a major downturn, according to the analysis.

The report stated: “Exporting industries bring money into a local economy and are the engines for their growth. If a city’s exporting base comes through the crisis relatively unscathed, this puts it in a good position to grow once more, while creating demand for the local services businesses that have had to close or severely limit their operations during the crisis. This in turn puts them in a stronger position to bounce back.”

The oil and gas sectors has been badly hit by plunging prices as demand has dramatically fallen. This has led to Aberdeen, where 11% of workers are employed in oil and gas as opposed to a national average of under 1%, being the worst affected city in Scotland.

Speed of recovery is another aspect to the crisis that is being scrutinised. Centre for Cities warned that resilience varied greatly between towns with apparent similarities. It used Plymouth and Milton Keynes as examples. Each town had around a third of all jobs that were vulnerable or very vulnerable to the downturn, the report stated. But analysis of the exposure of their exporting businesses showed that more than half of Plymouth’s exporting jobs were exposed in addition to its local services jobs. Milton Keynes, though, had 80% of its exporting base still operating. This was likely to allow it to bounce back more quickly.

The thinktank argued that because this economic crisis was affecting different parts of the country to varying degrees, different approaches would be needed to help them recover. For example, in cities where export jobs (those not serving the local market) have not been acutely affected, support should focus on helping the local services to find their feet again. But in cities where the export base was more exposed, more sustained support would be required.

Centre for Cities’ chief executive Andrew Carter said: “While from a public health perspective Covid-19 is affecting every part of the UK, its economic impact will be felt more acutely in some places than others. This effect is linked to the local economy and it appears that places that are particularly reliant on aviation are likely to be hit hardest.

“Because of this, a one-size-fits-all approach to economic recovery will not work. Once the immediate health crisis passes policymakers will need to tailor their economic interventions to specific cities and regions.”