Sleep and exercise down, back pain and TV up in UK lockdown 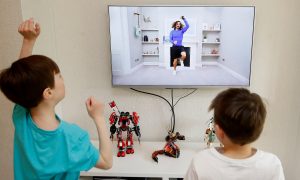 The UK’s children may be keeping fit in front of YouTube, and the parks that are open remain full of runners, but for most people the coronavirus lockdown has been a time of inactivity, insomnia, back pain and alcohol consumption, a survey has found.

In news that will surprise no one hunching over their laptop in a hastily repurposed bedroom, the mass shift to working from home has led to a significant increase in musculoskeletal complaints, the survey by the Institute for Employment Studies (IES) found, with more than half of those who responded saying they were experiencing new neck, shoulder or back pain.

Levels of healthy diet and exercise have plummeted in the fortnight since lockdown, with 60% saying they are exercising less, a third eating less healthily and 20% saying they were drinking more alcohol.

Almost two-thirds (64%) of the 500 respondents said they were sleeping less due to worry, while 48% said their new working life involved increased and irregular hours.

“Certainly over the first two weeks of lockdown, we seem not to have reacted as well as you might have hoped,” said Stephen Bevan, the IES’s head of HR research development.

Organisations have had to adapt quickly to large-scale homeworking, he said, and while health and safety issues had not been a priority until now, “I do think there are going to be questions over whether people can sustain prolonged laptop working”.

Among the survey’s lessons for employers, he said, was a finding that staff in regular contact with their bosses had better mental health. “The lockdown is a great thing from a public health point of view, but if we take our eye off the ball in terms of the physical and emotional wellbeing of those working from home, we could be storing up problems for later.”

Sarah Lindsay, a three-time Olympic speed skater and the founder of Roar Fitness, said an issue with the lockdown was that “when people lose their routines they sometimes don’t know what to do with themselves”.

“You could flip that on its head,” she advised. “I don’t have to go out drinking with my colleagues, I don’t have the commute, you may have an extra hour or two a day. So much of this is mindset, and settling into the fact that we are going to be off work for a while, you can’t just let it be a downward spiral.

“It’s difficult to tell people to be positive when there’s a lot of uncertainty and people are worried. But it’s the most important time ever to be health-conscious and look after yourself.”

A clue to what Britons have been doing instead of exercising lies in the latest official TV viewing figures collated by the ratings body Barb. TV viewing has jumped to an average of three hours and 46 minutes a day – higher than the levels normally seen at Christmas. The daily Downing Street press conferences have become required viewing for millions, and more than 22 million people watched the Queen’s address to the nation on Sunday night.

One viewing habit does bode well for the nation’s health, however. Jeremy Martin, Barb’s insights manager, said there was a notable surge in TVs being turned on between 9am and 9.30am each day, without being tuned to a traditional station.

While he couldn’t be certain, he said “it seems likely that it is driven by PE With Joe, an exercise class for children which is streamed live on YouTube in this half-hour.”

Original article ‘Sleep and exercise down, back pain and TV up in UK lockdown’ written by Ester Addley and Jim Waterson and Published by The Gardian