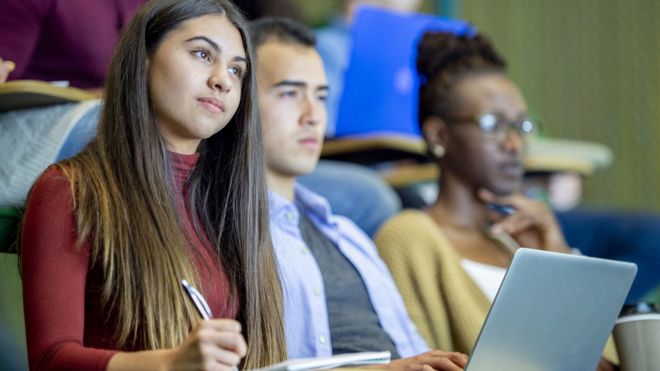 Higher pay still makes it financially beneficial to go to university for most students in England, says research from the Institute for Fiscal Studies.

But 20% are worse off after paying for courses, says the study commissioned by the Department for Education.

Universities Minister Michelle Donelan says students and taxpayers needed to get value from their “investment”.

The government has promised to tackle “low quality” courses.

But university leaders say there can be other forms of social and personal “value” from higher education, as well as measurements of graduate earnings.

The study on projected earnings, based on tax data, shows wide variations in the financial winners and losers between different subjects.

These gains and losses are counted after the cost of going to university has been deducted.

This includes £9,250 per year in tuition fees, loans for living costs, interest charged on loans and lost potential earnings from studying rather than being in jobs.

The average student graduates with about £50,000 in debt.

More women go to university than men – and a higher proportion of women, 85%, compared with 75% of men, will get a positive financial return.

But female graduates have lower lifetime earnings, which the analysis says is likely to reflect women taking time off or reducing hours when they have children.

The gender gap in earnings opens when graduates are in their 30s – although the data does not distinguish between part-time and full-time work so part-time could look like lower pay.

But for 70,000 students each year the costs of going to university – such as fees, loans and lost earnings while they studied – will be greater than any extra money they make in earnings, so they make less than their counterparts who went to work straight after A-levels.

Ben Waltmann, of the Institute for Fiscal Studies, said the public finances gained on average from higher education, “because high-earning graduates go on to pay an awful lot of tax”.

That still meant that government finances had to subsidise almost half of individual graduates – with the biggest losses concentrated in subjects such as creative arts.

There have been suggestions that funding could be restricted for degrees offering poor value to students.

And these findings are published as the government prepares its response to Philip Augar’s review of student finance.

This recommended that tuition fees should be cut to £7,500 and that students needed better value for money.

The higher education watchdog, the Office for Students, is also carrying out a review into how funding grants should be prioritised between different subjects.

But the UCU lecturers’ union has warned against making simplistic links between the quality of a course and future salaries.

“Earnings potential is also heavily impacted by factors such as an individual’s background, their parents’ jobs, their gender, where they are from and where they live after graduating,” says union leader Jo Grady.

And she said decisions about the value of courses needed to reflect “the wider benefits that education brings to individuals and to society”.

Nicola Dandridge, chief executive of the Office for Students, said it was crucial that university applicants had “clear and factual information” and “data on earnings potential is an important part of that picture”.

Others argued that apprenticeships were better value.

“This analysis is fresh evidence of how the current university model is broken,” said Euan Blair, co-founder of apprenticeship provider WhiteHat.

“Young people are being pressured to go to university without any consideration given to whether the experience will be positive or if they’ll be equipped to pursue the career they want,” he said.

But even when earnings might be relatively low, graduates might be working in sectors making “vital contributions to the wider economy and society”, said Alistair Jarvis, chief executive of Universities UK.

He said it was important to recognise that the “benefits of a degree stretch far beyond salary outcomes”.