Mental health at work: How it affected my first job 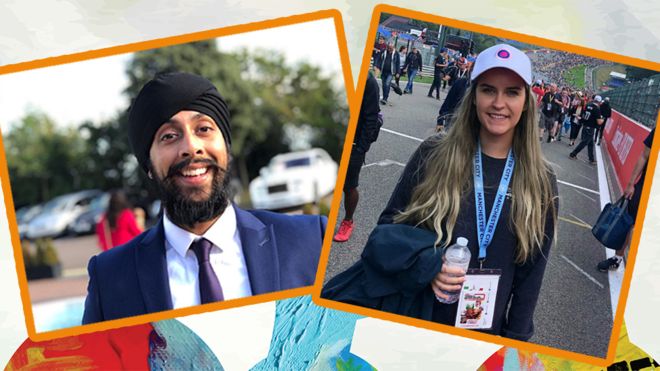 “It’s hard. Some days I do feel low at work and I can’t concentrate fully, but I can’t really talk to anyone about it.”

Gurvinder Singh and Karla Threlfall both recently started their first jobs – Gurvinder after graduating from university and Karla through an apprenticeship – and both experienced difficulties with their mental health while completing their studies.

That’s not unusual – 12.5% of people aged 21 to 25 say they suffer from depression, which rises to 17.2% in 18 to 20-year-olds, according to a Vitality survey – more than double the average found for other age groups in work.

So it’s not surprising that young employees are the most vulnerable in the workplace when it comes to mental health, according to research by the charity Mind. For some, making the move from studying to work can be particularly tough.

Gurvinder was diagnosed with depression while at university and ended up deferring his final year.

He took out his feelings on the people closest to him, which led to him losing friends and added to the sense of isolation he was feeling.

“I understand now that they couldn’t cope with what I was putting them through,” Gurvinder says.

The 23-year-old went to see his GP, was prescribed anti-depressants and, through that and rediscovering his Sikh faith, became more comfortable with talking about his mental health.

But he was still experiencing lows and with the end of university fast approaching the general anxiety he often felt began to get worse.

“I decided not to apply for graduate jobs so I could focus solely on my studies, because I was struggling already. There was a massive fear of, when I come out of uni, what what the hell am I gonna do?”

He landed his first job as a finance assistant at a local council a few months after graduating. Gurvinder found the structure and routine it gave him helped him deal with the transition from studying to the workplace.

“At uni your lectures are all over the place and you don’t have to go to them. Whereas at work you have to go, it provides that routine. So you’re forced to wake up on time, you’re forced to sleep on time. And that provided a sense of security to me.”

What’s been harder is living in a different city to his friends – and being cut off from some of the support system he’d developed.

“I’m surrounded by people of different ages, some who don’t really understand what mental health is. And it’s hard. Some days I do feel low at work, and I can’t concentrate fully, but I can’t really talk to anyone about it.”

Last week Gurvinder built up the courage to speak to his boss about his depression diagnosis.

“There were days that I was coming in late to work. The antidepressants can make you sleep quite a lot and feel weak. So I felt like I had to tell him,” Gurvinder says.

He approached his boss, asked for a word in private, and told him about his diagnosis and what his previous experiences have been with depression.

“He told me that lots of employees within the organisation also have depression and mental health problems. So he was very understanding of it.”

Gurvinder had been worried that he was underperforming at work because sometimes he finds it hard to concentrate. But he found that telling his boss about his mental health took a lot of pressure off.

They told him about a wellbeing service run by the council, made sure Gurvinder knew it was OK to spread his workload out – and, importantly, let him know it was OK to take time off due to mental health.

Advice for dealing with mental health at work

When you go to work, your employer has a duty of care. That means that they are responsible for your health and well being.

You can handle something like depression in the same way as flu or if you’d broken your arm.

The first thing that you need to think about is letting your employer know that you can’t come into work, and to give them the reason for that. Be honest – it doesn’t usually help to try and hide the truth in these situations.

If you’re experiencing mental health problems at work it’s important to find someone safe in the workplace that you can talk to that about. As soon as you can, make a list of the things that you might need to make your working life more manageable or better – a change to your hours or some of the duties you do.

There are times when an employer can’t make the changes that you might think that you need or want. If you don’t think it’s reasonable it’s a matter of putting in a written complaint. However, what can often work very well in that situation is to have more of a conversation with your employer and see what they can do and see if there’s some sort of compromise between the two of you that will work.

You shouldn’t be discriminated against or disadvantaged because of mental health. That is the that is the most basic protection we have. It’s in something called the Equality Act.

But it’s always useful to go in informed. If you’re lucky enough to be a member of a trade union, talk to your trade union representatives, check your employee policies, your handbooks.

If you’re a zero hours worker, or you’re a gig worker, having a mental health condition shouldn’t mean that you’re not given certain gigs are given certain shifts. It should never be used as a punishment.

Mental health in the workplace is a relatively new thing. And we haven’t got all the solutions.

Mind found that young people are more likely to use their holiday days instead of taking sick days when experiencing poor mental health – but also feel the pressure of “presenteeism”, when people go to work despite not feeling up to it, more than other age groups.

It’s something that Karla still struggles with.

“Sometimes even now it just feels easier if you take holiday because you won’t be asked questions, because it still sometimes can be hard,” she tells us.

The 22-year-old started an apprenticeship after finishing college, where she’d struggled with anxiety and eventually did her work from home rather than going into college.

“The work itself was fine but for whatever reason I just couldn’t get into the actual building.”

Karla felt like her mental health had improved when she started at work. “Yeah, that was all fine – or I thought it was fine,” she says.

Her employers felt differently though.

“They noticed a change in how I was, like my general mood, and they got my supervisor for my apprenticeship to come in and check everything was alright.

“That’s when I had a little bit of a cry in a room one day and was overcome with them saying… I mean, I hadn’t even realised myself. I thought I was hiding it well but apparently, I wasn’t.”

Karla had the opposite experience to Gurvinder, finding the changing in routine triggered her anxiety.

“Sometimes it’s just the unknown. And then once you’ve started worrying about that then obviously, especially with anxiety, it just plays on you and you then carry on worrying yourself more about it.”

It was also winter and Karla says there was a “whole seasonal aspect”.

“Especially from getting up early for the commute and then obviously getting back in the dark. In college that was bad but it was more on a timetable, so I could be finished at lunchtime and still be leaving in the day.”

And work just felt a lot more real than college.

“With such a change it would feel as if like, ‘Oh, well I’m not coping with all of a sudden having a normal job, what’s wrong with me?’ Even though actually it’s nothing to do necessarily with the job. It’s just because I’m ill.”

She self-referred to a charity in her area and was given 10 weeks of Cognitive Behavioural Therapy (CBT) at a local library – which her employers were more than happy to let her leave early for or take a bit of time out of the office.

Both Gurvinder and Karla say that talking to their employers about their mental health has made their lives easier – from stressing less that they’ll be seen as underperforming, to no longer feeling like they’re hiding something.

They both also think keeping in touch with friends and family can only be a positive.

Article – Mental health at work: How it affected my first job – by Kameron Virk originally posted on BBC