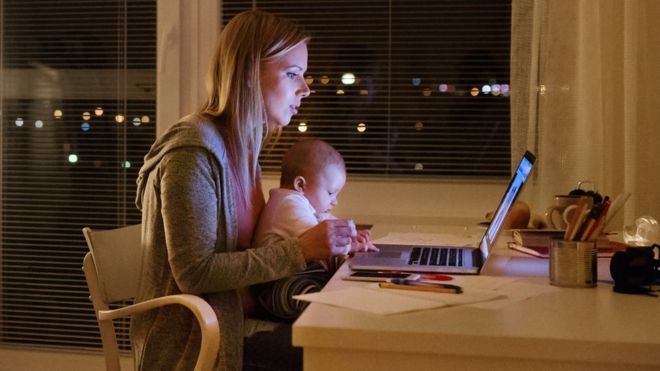 More parents now feel under pressure to check their work emails in the evening, according to a report.

The 2020 Modern Families Index found that 44% of parents check their emails or do other work at night.

Of those, three quarters said they did not have a choice, an increase since the study was carried out last year.

And that is causing tension at home with more than half of respondents saying it led to arguments with their children or partner.

The report said that the ability of working parents to “switch off” from their work was being undermined by the rise of modern communications, with almost half agreeing the boundaries between home and the workplace have blurred.

However, the study found that more people thought their boss was taking notice of the need for a work-life balance, with 50% saying that their employer cared about getting that balance right. That has increased from 42% five years ago.

But flexible working policies are not always effective in reducing the workload for parents.

Of those who can work from home, almost half said it probably increased the hours they put in.

The study of more than 3,000 parents found that 60% of those working extra hours said it was the only way to deal with their workload.

“The research makes clear that jobs need to be ‘human-sized’,” said Jane van Zyl who runs Working Families, the charity behind the report.

And there is still a significant disparity between men and women. Less than a third of parents said they share childcare equally.

On average, women spend 26 hours a week caring for children or doing household chores That compares to just 16 hours for men.

However, that has increased since the 1970s when men’s involvement with their children averaged less than 15 minutes a day.