So THAT’S why you can’t get out of bed: Working Brits aren’t genetically suited to rising in time for work at 9am – because their natural wake-up time is 7.55am 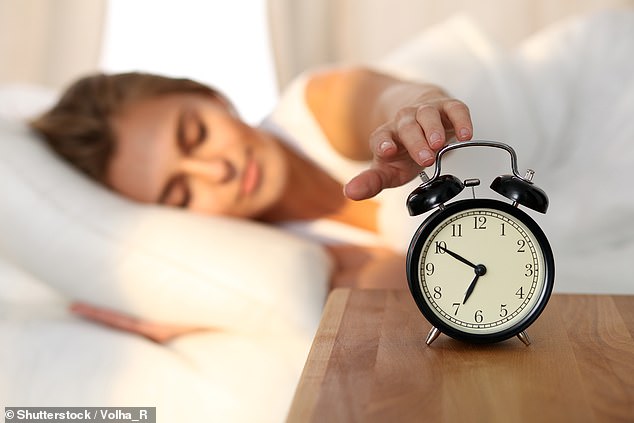 The majority of working Brits are not genetically suited to wake up in time to start work at 9am, according to new research.

New data from consumer genetics company, 23andMe has revealed that the average person’s genetic wake-up time is 7.55am, but with a typical commute of an hour, this leaves little time to get ready and into work for 9am.

It also found that the only generation with a genetic wake time compatible with the 9-5 day are those soon to retired – aged 60 plus – who naturally rise at 6.54am.

By setting an alarm to make the traditional 9-5 shift, Dr Neil Stanley argued people are at risk of minimising their chances of waking up in REM sleep – the optimal physiological state to transition from sleep to waking.

The findings appear to suggest a need to consider more flexible working, which could improve the nation’s overall health and productivity.

The research was conducted by calculating a person’s average wake time by performing a GWAS (genome wide association study) on a global survey asking over 526,000 participants whether or not they were a ‘morning person’ or ‘night owl’.

This then identified 450 variants associated with being a morning person or night person, which was then used in conjunction with age and sex data in a separate sample of 70,000 participants.

The results built a statistical model to predict a participant’s average wake-up time on non-workdays, based on a separate survey question.

This was as follows: ‘On a typical non-workday during the past 6 weeks, when you were able to wake up on your own, at what time did you wake up?

Further research from the study revealed Brits admit to working on ‘autopilot’ for three out of the five working days and waste an average of one hour and 22 minutes a day as a result of feeling tired.

It was found that waking up in the wrong part of your sleep cycle can have a negative impact on your wellbeing, making you liable to low moods, irritability and impaired cognitive function – all of which can affect working performance.

When analysing current work patterns, almost a third of Brits said there’s no flexibility in their workplace (32 per cent), while 46 per cent believe their overall health would benefit if they were able to work more flexibly.

Meanwhile, the rigid working day has become too much of a strain for some as over a third of Brits (37 per cent) admit they are considering going freelance in a bid to improve their work-life balance, with 15 per cent having already made the move.

Of those who reported to being able to work more flexible hours, 63 per cent feel happier, 60 per cent more refreshed and a further 60 per cent admit to being more productive.

Article – So THAT’S why you can’t get out of bed: Working Brits aren’t genetically suited to rising in time for work at 9am – because their natural wake-up time is 7.55am – by Chloe Morgan originally posted on Mail Online